Between Quinta do Lago & Vale do Lobo 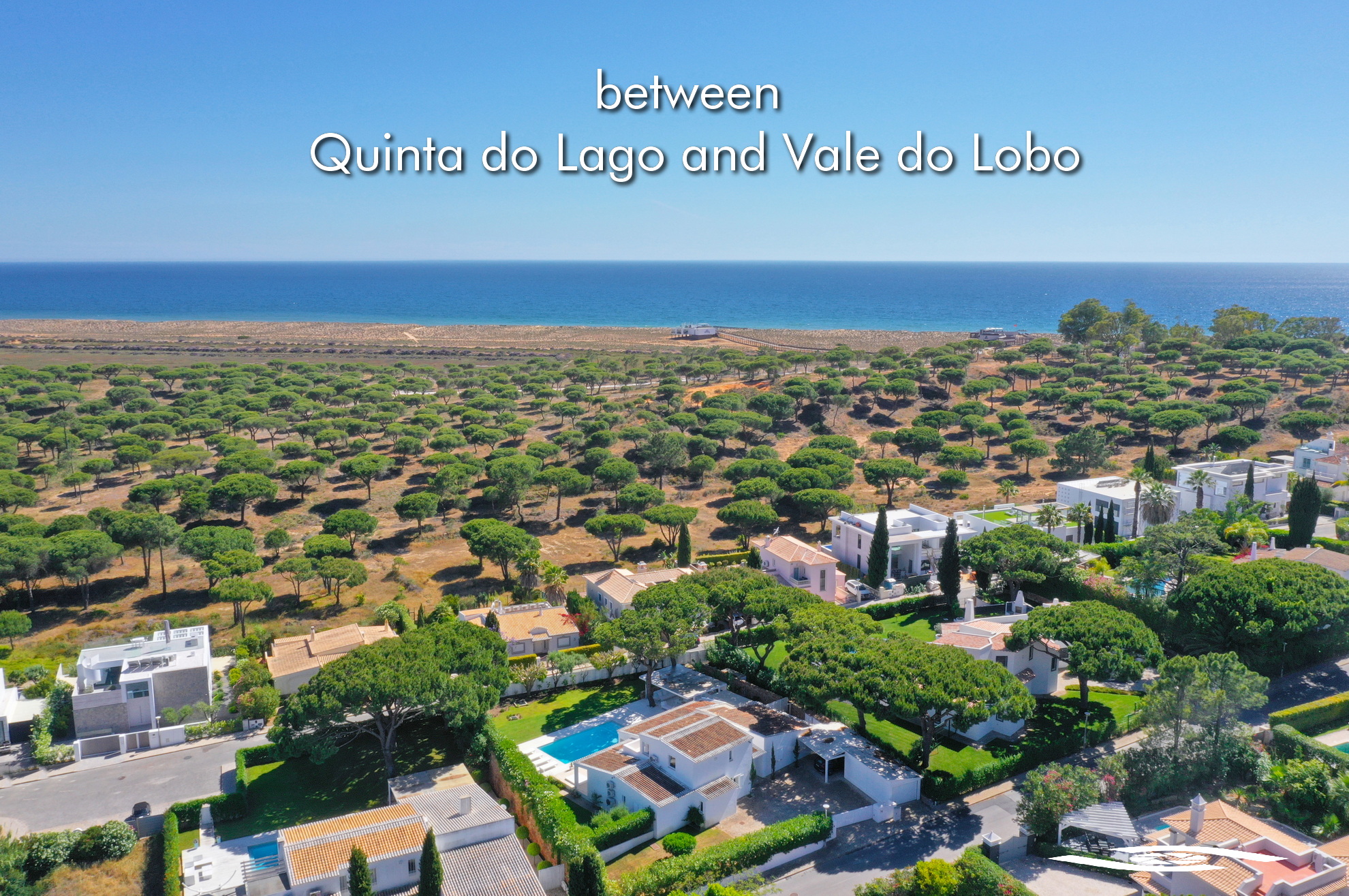 Between Quinta do Lago & Vale do Lobo has a vast number of housing and apartment developments close to the sea, without the costs of a luxury resort, however they benefit from the service of good quality infrastructure, proximity to 7 golfs, the main services of the malls, the restaurants, private security, surrounded by an environment of nature, ocean and the Ria Formosa!

Between Quinta do Lago and Vale do Lobo

Living near the sea between Quinta do Lago and Vale do Lobo is a great option for those who want to be close to all the infrastructure of the Golden Triangle, including golf courses, beaches, restaurants, however prefer to live outside the resorts, or invest in real estate with a lower investment value. It is an area that has benefited a lot from the infrastructures developed by Infralobo or Infraquinta. The roads have improved, and the appearance in general has been greatly modernized, enhancing the conditions and values ​​of the real estate market. Throughout the surrounding Quinta do Lago and Vale do Lobo resorts there are different urbanizations, with some different characteristics:

Quinta Verde, an excellent urbanization outside the resorts. Located at the entrance of Quinta do Lago, Quinta Verde is an urbanization with approximately 50 detached villas with swimming pool, built on plots with an average size between 1000m2 and 1500m2. It works with condominium services, with own private security, gym and hairdresser. The houses have above average quality construction, and prices vary between 2 million and 4 million euros. It is a condominium with a lot of demand for famous international athletes. Quinta Verde is located on Avenida Sacadura Cabral (between Almancil and Quinta do Lago), close to the SEAU.com Real Estate office, approximately 900 meters from the first roundabout at the entrance of Quinta do Lago and Quinta Shopping.

Quinta do Mar, is a development with an excellent location very close to the beach, which allows owners and guests to easily walk to the beach. Most of the houses have been built to good quality standards, appearing in a careful urbanization, with a quality visual appearance. Here we have houses built on plots of land with approximately 1000m2. The transformation of the Quinta do Mar urbanization into a condominium is being prepared, with common areas for tennis, paddle tennis, and other services. The purchase price for a villa in Quinta do Mar is close to 2 million euros.

Pine Woods is a condominium of two bedroom apartments located in front of Quinta do Mar, with a great view over the pine forest and the sea, and a nice communal swimming pool. These apartments are located in front of a nature reserve area where building is not allowed, very close to the beach and nature. These are apartments that are rarely placed on the real estate market, creating a waiting list for buyers. The market values ​​of Pine Woods apartments currently range between 1 million and 1.8 million, depending on the floor on which they are located, and the state of conservation of the properties’ internal infrastructure.

Quinta das Salinas is the southernmost urbanization closest to the Ria Formosa and the beach. Despite its bordering the Quinta do Lago resort, the entire perimeter that separates the resort is fenced, with the exception of the paths to the south, on the Ria Formosa that allow the passage. The paths to the south allow the passage for walking in less than 10 minutes to the Quinta do Lago Lake. Due to being a development with a few years of existence, there is a great variation in the quality of construction and architecture of the houses. Since 2016, the urbanization of Quinta das Salinas has been the target of new architectural projects, with investment by foreign and national investors seeking to capitalize on the excellence of a location that has been little explored until then. Houses with great construction quality have appeared, however it is still possible to find houses with several decades. Quinta das Salina is a very popular urbanization with Portuguese investors, due to its proximity to the beach and golf courses of Quinta do Lago. The size of building lots is variable. There are double lots with more than 2000m2 and smaller lots with dimensions between 500 and 600 m2. The value for a villa in Quinta das Salinas varies between 1.5 million euros and 3 million euros.

Varandas do Lago, is the largest urbanization existing between Quinta do Lago and Vale do Lobo, with more than 150 plots for detached villas with swimming pool, three plots of townhouses, and perhaps the urbanization with more residents. Most of the houses have a very similar traditional Portuguese architecture, with roofs in traditional Portuguese tile, practically very similar, with buildings dated after 2000. The individual lots are occupied by an architecture with the construction and swimming pool occupying more than 80% of the lot. The value of a house with a pool in Varandas do Lago is approximately 1.3 million to 2.5 million euros, depending on the quality of construction and finishes, location, and availability in the real estate market.

Clube do Ancão, with an excellent location, is one of the oldest urbanizations in this area between Vale do Lobo and Quinta do Lago, consisting of a few dozen building plots, two tourist apartment blocks, an aparthotel, however it is of the places where construction is more dispersed. The aparthotel is undergoing extensive renovation by Vanguard. The Clube do Ancão development has very nice views, with a situation very close to the beach. Currently there are 3 bedroom townhouses for sale, with traditional construction, and values ​​ranging between 400,000 and 500,000 euros.

Vilas Alvas, a development that grew with medium quality properties, however it has developed in recent years with new architectural projects, and superior quality constructions. With few lots for sale, it has two architectural projects for the construction of modern townhouses, which are expected to come soon. Currently the urbanization is in constant development, with a mix of 90s houses and modern houses. The values ​​have doubled in recent years, with detached houses with swimming pool, to be sold at values ​​above 1.2 million euros.

Dunas Douradas (old village), is an urbanization comprised of lots of individual villas with swimming pool, townhouses with swimming pool, apartments, and a common area to support the owner, with a restaurant (Xénia restaurant), two tennis courts, and communal swimming pool. The Dunas Douradas development comprises zone 9, with more modern houses and proximity to the beach, and zone 8 also with some good quality houses close to the beach. Lately, the semi-detached houses have been the target of renovations, giving rise to the modernization of the interior architecture and infrastructure.

Seabreeze, a development belonging to the Dunas Douradas group, with good views, built with quality finishes from a project by the architect Matias dos Reis. It consists of 7 apartments with two and three bedrooms.

Fazenda Santiago is a luxury condominium located on the northwestern border of Vale do Lobo. Consisting of approximately 20 lots with luxury detached villas in large plots ranging between 2000m2 and 4000m2 and a set of 5 townhouses. It is a very quiet urbanization, located on a hillside overlooking the sea 1.5 km from the beach. The first buyer a few years ago of a house on Fazenda Santiago was the artist Michael Jackson’s manager for Europe. This gentleman spent most of his time here. At the time, he was known by the community for his friendliness and for the decoration of the house, which featured numerous photos with famous artists.

Quinta Jacintina, is an urbanization located to the north of the Vilas Alvas urbanization, close to the Royal Golf of Vale do Lobo, closer to the restaurants and to Av. Almirante Mendes Cabeçadas that connects the Vale do Lobo and Vale do Lobo resorts. Quinta do Lago. It is a development of approximately 30 houses with plots between 500m2 and 1000m2, built with a predominance of detached houses of traditional Portuguese architecture with swimming pool. Some lots were built with two townhouses, with individual swimming pools. All houses have a good sun exposure. Quinta Jacintina is the place chosen for the residence of famous people and some renowned entrepreneurs of Quinta do Lago, leading to an improvement in the surroundings. Here we also find a small boutique hotel.

Garrão, an urbanization located on the eastern border of the Vale do Lobo resort, very close to the beach. It was one of the urbanizations that benefited the most from Infralobo’s infrastructure, with a restructuring of access roads, new roads, resulting in an improvement in the visual aspect. Here we find housing in small isolated plots, ranging between 500m2 and 1000m2, townhouses and apartments. It is an area with its own charisma, consolidated vegetation, where we find houses of various types and architectures. The Portuguese love this location.

Quadradinhos, is an urbanization located inside the Vale do Lobo resort, but with independent management, which limits access to the Vale do Lobo Club Member. The Quadradinhos urbanization is made up of older houses, which have been remodeled with modern architecture over the last few years. The market value for a renovated house in Quadradinhos is around 1.5 million euros. Regarding the apartments, there are the apartments Jardins do Golfe and Golfe Jardins.

Encosta do Lobo is also an urbanization located within the resort Vale do Lobo, independently managed. It is located on a hillside above the Dunas Douradas Beach Club, with great sea views. Currently there are detached houses and townhouses. The market values ​​for detached villas with swimming pool are around 3 million to 4 million euros. The lots available for sale are approximately 400m2 with market values ​​below one million euros. The sale price for a 4 bedroom semi-detached house is above 1.5 million euros.

In the peripheral area of ​​the Golden Triangle of Vale do Lobo and Quinta do Lago there are still some urbanizations that have been increasing their values ​​due to the increase in demand, namely:

The Village, a previously underdeveloped urbanization, has been the target of interventions in recent years, however it still needs some improvements. Here we can find townhouses with values ​​around 500 thousand euros, and detached houses with swimming pool with affordable values ​​between 1.2 million euros and 1.6 million euros.

Fonte Santa, an urbanization made up of houses on large plots, ranging between 5000m2 and 2500m2, located close to the beach, surrounded by a pine forest environment – ​​some large and large plots proximity to the beach. The buildings are a mix of 80’s, 90’s, and modern architecture houses. Infrastructures have been improved over the past few years.

Fonte Algarve, an urbanization comprising just over 30 plots of detached villas with swimming pool, and a new allotment of luxury townhouses, designed by the architect Vasco Vieira. Fonte Algarve is located between Quarteira and Almancil, with medium-sized houses on plots between 1500m2 and 900m2, with affordable values ​​between 1 million euros and 1.8 million euros. Fonte Algarve is a very central urbanization, however it is the most peripheral of the Golden Triangle, with a good situation between towns.